Out & About: News from the Winger Lab
We keep a busy schedule of research, teaching, outreach, fieldwork and seminars. We post many of the highlights here, and you can also follow us on Twitter.

Ben was interviewed recently for several bird-related articles, including an article in Smithsonian Magazine and two articles in Mlive (here and here).

The 2020 North American Ornithological was supposed to be held in Puerto Rico, but was held virtually due to the pandemic. Winger Lab PhD student Eric Gulson-Castillo and undergraduate Vera Ting each presented posters (shown below) while lab affiliates Shane DuBay and Jacob Berv gave presentations. 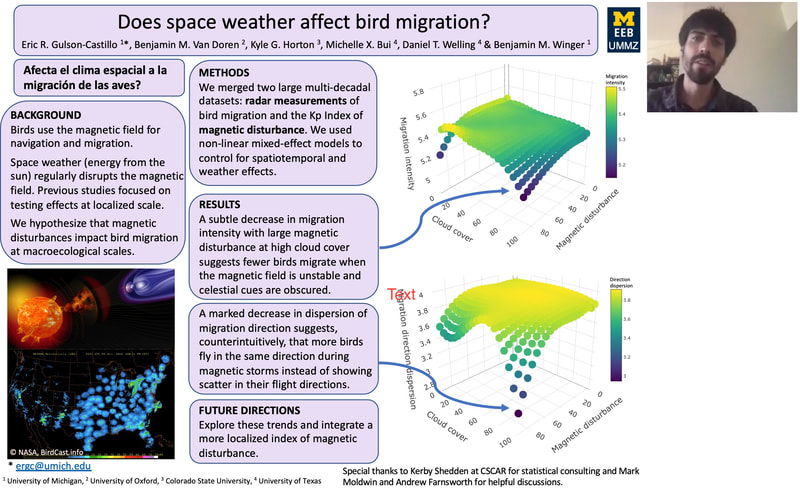 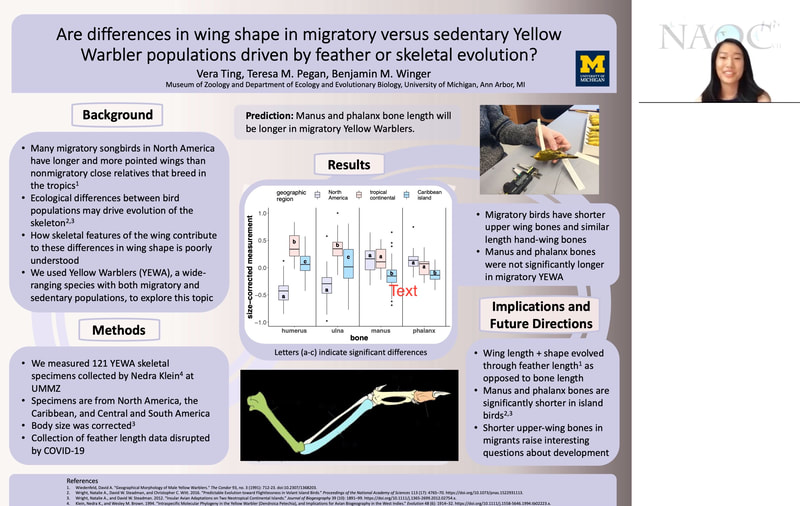 Teresa Pegan's recent paper on the evolution of geographic range in migratory birds was featured in this nice write-up.  The paper can be found here. This paper represents the first of Teresa's dissertation chapters. The rest of her dissertation focuses on evolutionary consequences of migratory movements for population divergence, using genomic tools.

Congratulations to Winger Lab students Teresa Pegan and Eric Gulson-Castillo for winning Graduate Student Research Awards from the Society of Systematic Biologists and to Eric and Susanna Campbell for winning awards from the American Ornithological Society (Eric the AOS Joseph Grinnell Award and Susanna the ​Werner and Hildegard Hesse Award).  Congrats also to Melanie Florkowski, a Winger Lab undergrad alum and current PhD student at Texas A&M, for winning the AOS Award.  This generous support will go a long way to funding their dissertation research and highlights the value of supporting our academic societies.

Update June 2020: Eric and Susanna were also both award Paul A. Stewart Grants from the Wilson Ornithological Society!

Last March, Ben did a fun interview about the evolution of bird migration for WNYC's Radiolab. The episode aired on December 18th. It's a great exploration of the wonders of animal migration, featuring some giants in the field of bird migration and conservation including Martin Wikelski and David Wilcove.
​Episode here: https://www.wnycstudios.org/podcasts/radiolab/articles/there-and-back-again 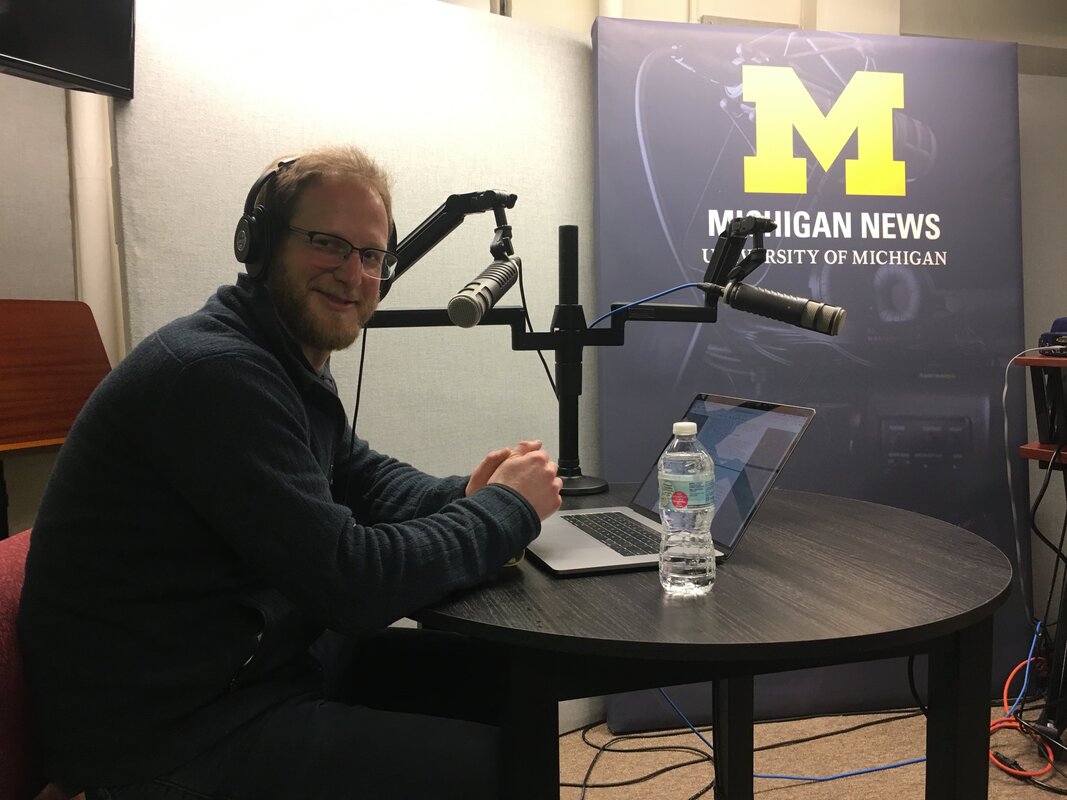 For the past couple years, Ben and other lab group members have been studying an extraordinary specimen time series of morphological measurements of migratory birds from Chicago's Field Museum. The second of our papers using this dataset was published in December in Ecology Letters and attracted significant international media attention, quickly achieving the highest Altmetric score in the journal's history.  Check out the Press Release to learn more about the article, as well as some of the media: Washington Post, Wall Street Journal, CNN, BBC, Science Magazine, NBC News, Audubon

This paper is a prime example of the unique and important role that natural history collections play in documenting biodiversity past and present so that we can better predict its future. Without the monumental effort by collections staff at the Field Museum, these data would not exist. The paper is also an important example of Citizen Science: many of the specimens used in the study were salvaged by volunteers for the Chicago Bird Collision Monitors and brought to the Field Museum. 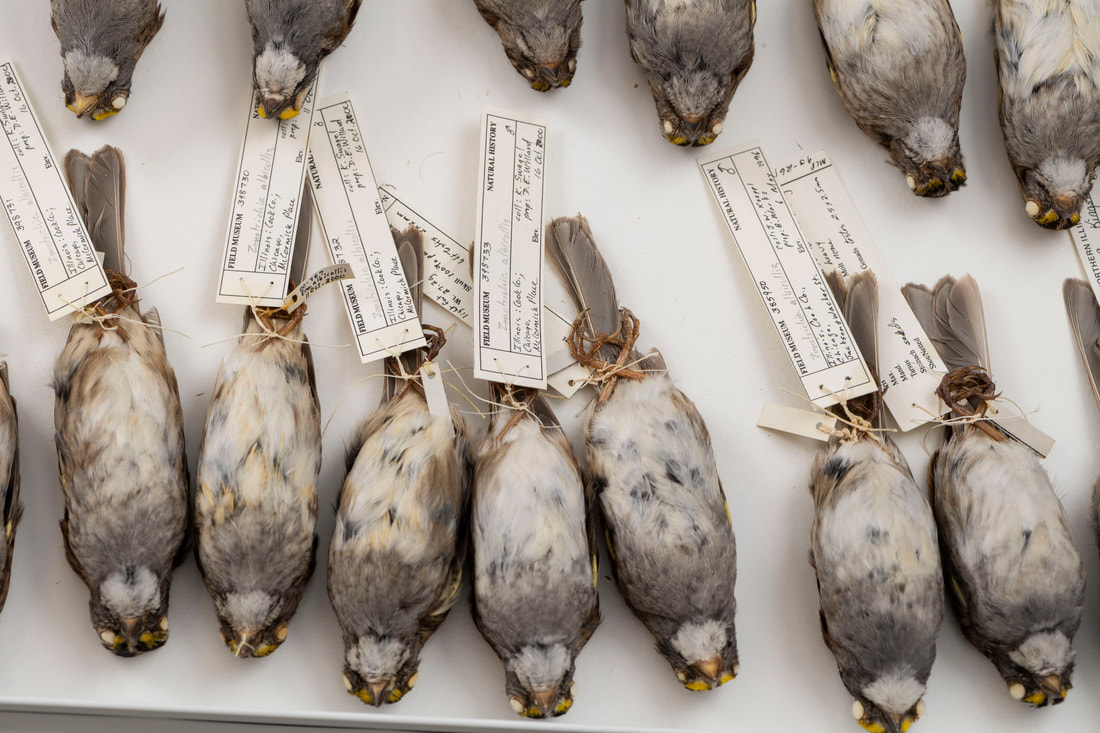 Ben was happy to participate in this feature article in National Wildlife on bird migration, which also features several other colleagues who are leaders in the field on the ecology, evolution and conservation of migratory birds. 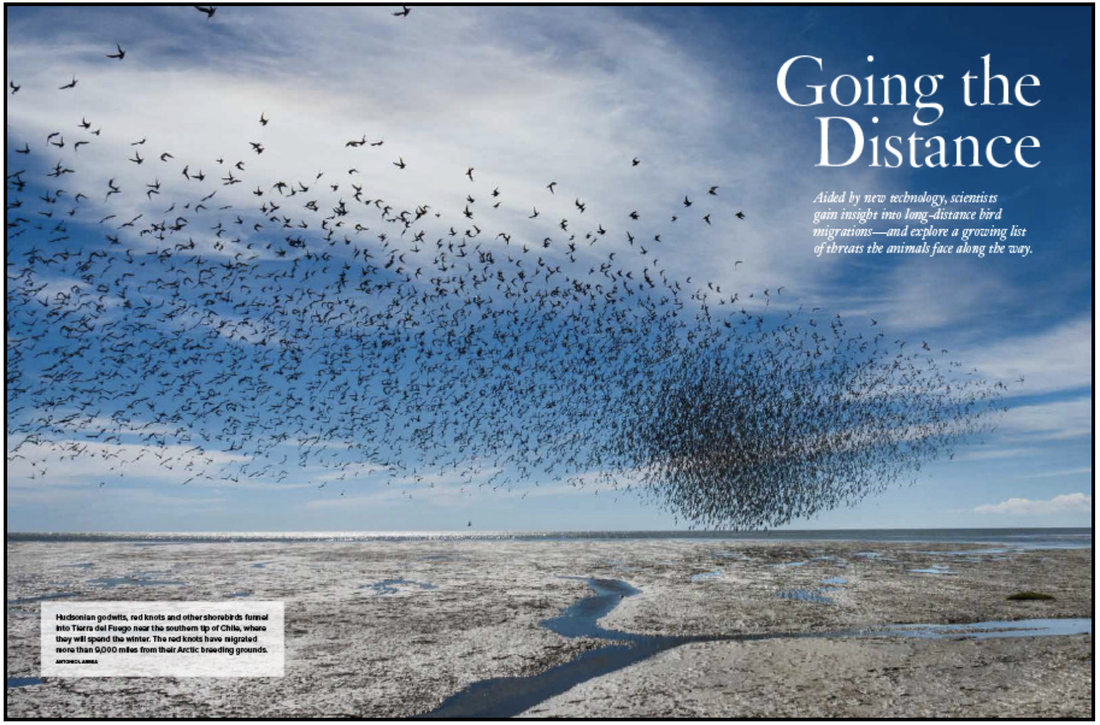 We are thrilled to welcome several new people to the lab! Kristen Wacker joins us as a new PhD student in EEB, Dr. Marketa Zimova joins as a Postdoctoral Fellow in UM's Institute for Global Change Biology (where she will work Ben Winger and Brian Weeks), and Dr. Jake Berv joins as a Postdoctoral Fellow in UM's Life Sciences Institute (where he will work with Matt Friedman, Dan Rabosky, Stephen Smith and Ben Winger). Brian Weeks finished his appointment as a Postdoc in the Winger Lab, but he has not gone far -- he is starting his own lab as an Assistant Professor in UM's School for the Environment and Sustainability and we look forward to continuing our collaborative work.

We also bid a bittersweet farewell to Mary Margaret Ferraro, a longtime staff member (and prior to that, high school volunteer) of the UMMZ. Mary Margaret has been our talented specimen preparator and collections assistant for several years, and she is moving on to an exciting new permanent position as the ornithology Collection Manager of the Cornell University Museum of Vertebrates and Cornell Lab of Ornithology. Congratulations Mary Margaret! 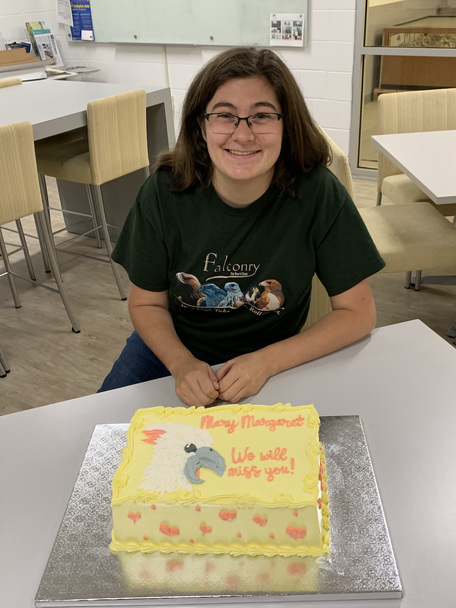 We continued our ongoing fieldwork studying boreal birds across their breeding ranges, this summer visiting Manitoba. ​The fieldwork resulted in some of the first genetic sampling from this part of the breeding range for many species, and will help further our understanding of both the evolutionary history and conservation needs of boreal birds. We thank the Manitoba Fish & Wildlife department for providing us access to a cabin in a spectacular area of boreal forest (video © Brett Benz):

It's been a privilege for us to be able to study an extraordinary but sobering dataset of bird-building collisions based at the Field Museum. Our first paper about this dataset is now published, and is available Open Access here.

This study was made possible in part through the hard work of many citizen scientists in Chicago and Cleveland, documenting bird collisions and submitting eBird observations. At the UM Museum of Zoology, we are engaged with similar collision monitoring efforts throughout Michigan.

We were honored to learn that our recent paper, "A long winter for the Red Queen: rethinking the evolution of seasonal migration", published in Biological Reviews, was selected as the winner of the American Ornithological Society's Katma Award. Read more here: ​https://lsa.umich.edu/eeb/news-events/all-news/search-news/challenging-bird-biology-dogma--winger-lab-wins-aos-katma-award.html

Thank you to the AOS for this nice honor!

A huge congratulations to Winger Lab postdoc Brian Weeks for a major — and richly deserved — career milestone: Brian has accepted an offer for a tenure-track faculty position in UM's School for Environment and Sustainability, starting in September 2019. We're thrilled for Brian's success and that he will be close by to continue as part of the UMMZ Bird Division's growing research community. Read more about Brian's work here: http://bcweeks.weebly.com/ 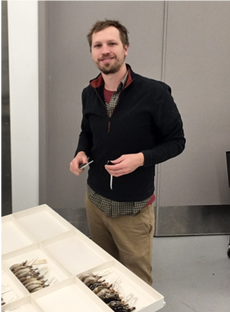 December 2018: seed funding granted for new research on migratory birds and the magnetosphere

A new research direction in our lab is studying the evolution of magnetoreception in birds and the influence of the magnetosphere on bird migration. We are pleased to have received $60K in seed funding from University of Michigan's MCubed program, for a collaboration between our lab and scientists from UM's Climate and Space Sciences and Engineering department. 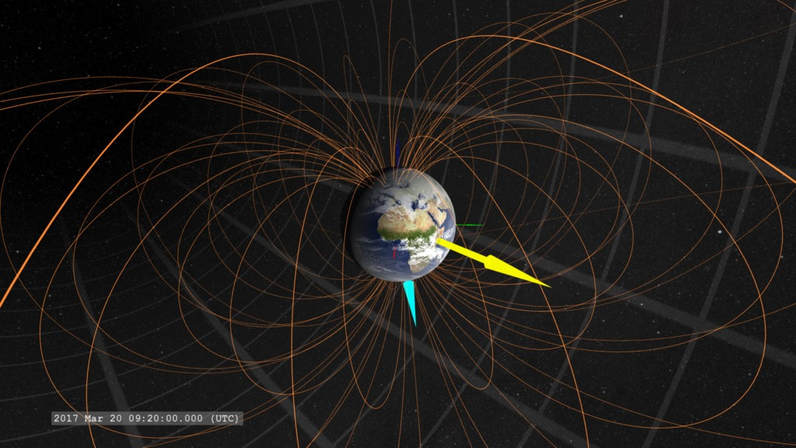 A new synthesis paper from our lab group explores the evolution of seasonal migration and its impact on evolutionary processes such as geographic range evolution.  We hope it will be useful for researchers working on and thinking about bird migration from a variety of ecological and evolutionary angles (​Read the paper here)

Winger Lab graduate students Teresa Pegan and Eric Gulson-Castillo each had first-authored papers published this fall, in PloS One and Wilson Journal of Ornithology, respectively, on research they did as undergraduates prior to coming to UM. It's always great to see undergrad research published -- kudos to Teresa and Eric for seeing these papers through!

Ben taught Ornithology (EEB433) this fall, along with Teresa Pegan as the Graduate Student Instructor. This was the inaugural class in the specimen-based teaching classroom in the new Biological Sciences Building on UM's central campus (read more about the building in this newsletter, where Ornithology is featured on page 4). The class makes intensive use of UMMZ specimens to teach global avian diversity (nearly 170 bird families are covered in the class!). We also had great field trips, including a visit to Black Swamp Bird Observatory's banding station, and the Detroit River hawk watch.

PhD student Susanna Campbell and postdoc Brian Weeks headed north this year to the western Upper Peninsula of Michigan to continue our ongoing field research on the population genetics of boreal birds. They were joined by our collaborators from the Cleveland Museum of Natural History and the Field Museum. The collaborative expedition had multiple foci, including specimen and sample collection for research on chickadee genomics, range shifts and morphological adaptation to climate change in migratory birds, and thrush microbiota. 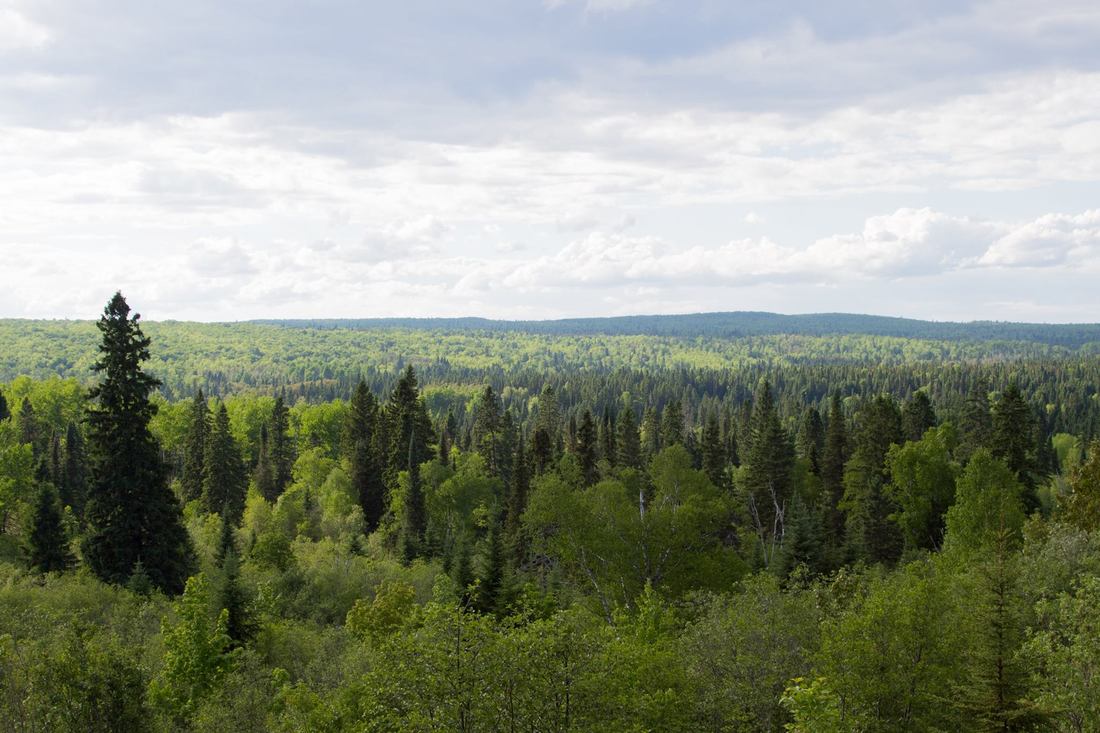 With support from a National Geographic Young Explorer's Grant, PhD student Teresa Pegan traveled to Borneo this spring to study nocturnal bird migration over the Crocker range near Mt. Kinabalu. The extent of nocturnal migration in the tropics is more poorly understudied than in the temperate zone, and Teresa's research promises to shed light on some interesting patterns. Teresa was joined by UMMZ Collections Assistant Mary Margaret Ferraro.

May 2018: Ben teaches Biology of Birds at the University of Michigan Biological Station

One of the longest-running field ornithology classes in the country is the Biology of Birds course (EEB 330) at the University of Michigan Biological Station in the northern Lower Peninsula. This class has been taught consistently since the inception of the station in 1909, and was made famous by the legendary Olin Sewall Petingill, who taught the class for many years while writing the widely used textbook Ornithology in Lab and Field. Ben had a blast teaching two weeks of the month-long course this year, along with Dave Ewert of the Nature Conservancy. The class explored all kinds of habitats near the Biostation and enjoyed a two-night camping trip at Whitefish Point and Tahquamenon Falls. A major highlight was a flock of Whimbrel that motored by Whitefish Point late one evening on their way to Hudson Bay.

The Winger lab descended on Tucson, AZ for the annual meeting of the American Ornithological Society. Ben presented work from a project with postdoc Brian Weeks on a large specimen series of migratory birds from Chicago that has revealed nearly universal morphological responses to climatic change across a diverse array of species. Brian presented work from his dissertation looking at the relationship between diversity and vulnerability of birds across the Solomon Islands. And PhD student Susanna Campbell networked with a range of researchers looking at chickadee hybridization to firm up her plans for her dissertation research and to connect with some of the other labs working on chickadees.

February 2018: Ben is quoted in a National Geographic article on bird migration 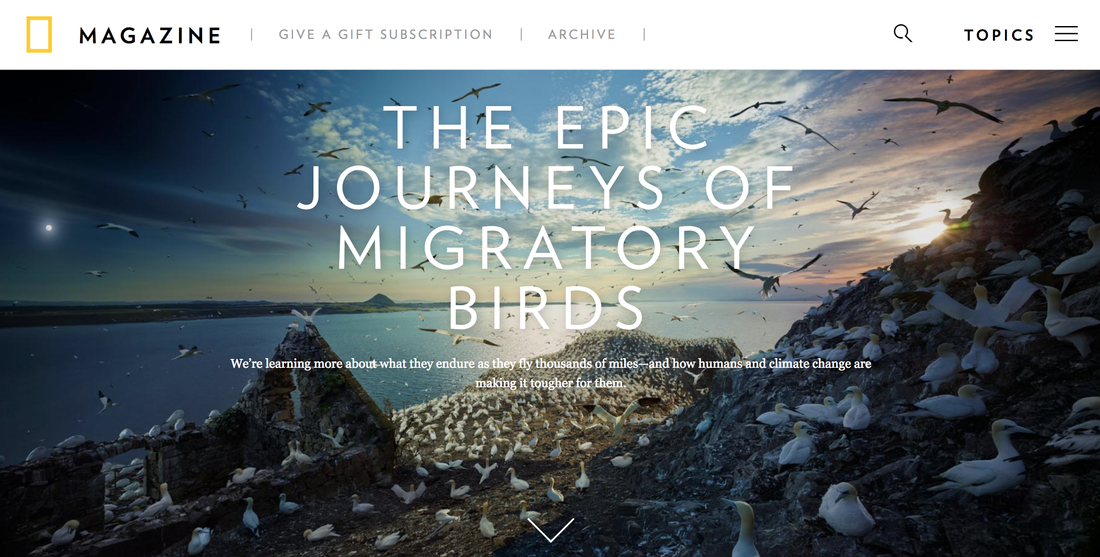 The culmination of Ben's PhD dissertation was published in the July issue of Evolution. Accompanying the article were this Evolution Digest feature and a UMich EEB research feature. 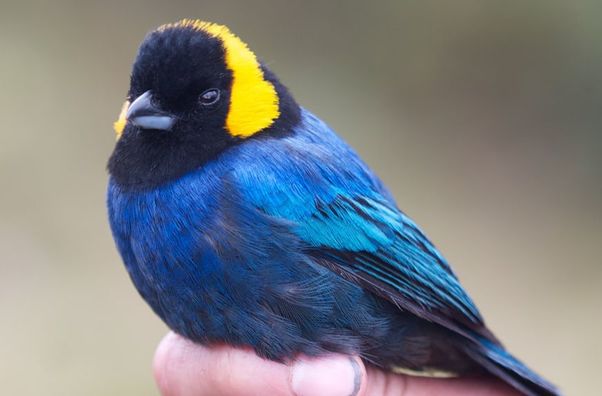 The Yellow-scarfed Tanager Iridosornis reinhardti, endemic to Peru, is one of the study species in this research. Photo ©Benjamin Winger.

Ben and collaborators Andy Jones and Courtney Brennan from the Cleveland Museum of Natural History and Heather Skeen from the Field Museum in Chicago traveled to northern Minnesota for their research on the population genetics of migratory boreal birds. The fieldwork resulted in some of the first genetic sampling from this part of the breeding range for several species, and will help further our understanding of both the evolutionary history and conservation needs of boreal birds. 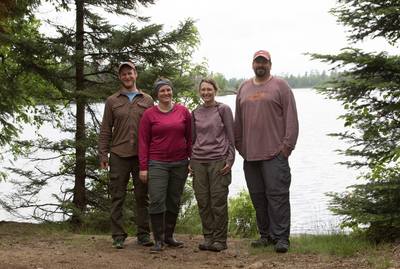 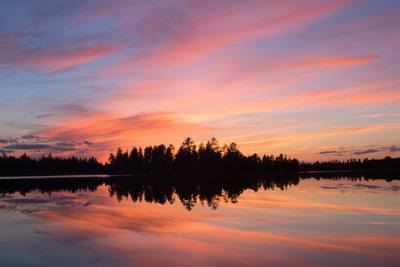 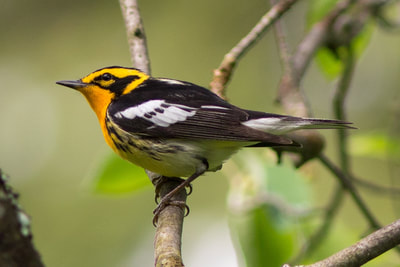 Ben's 2014 paper on the evolution of bird migration was featured in the spring issue of Living Bird magazine. The article included these fantastic gifs by Virginia Greene, illustrating the difference between the "northern" and "southern" home theories for the evolution of bird migration, which were central to the research. Ben's paper showed that bird migration evolved out of the northern hemisphere more frequently than had been previously supposed. This research was previously featured in other media including National Geographic.

Ben had a great time visiting Michigan State University's Kellogg Biological Station to give a seminar. He was thrilled to see the seminar advertised with this amazing chalk illustration of the Yellow-scarfed Tanager! 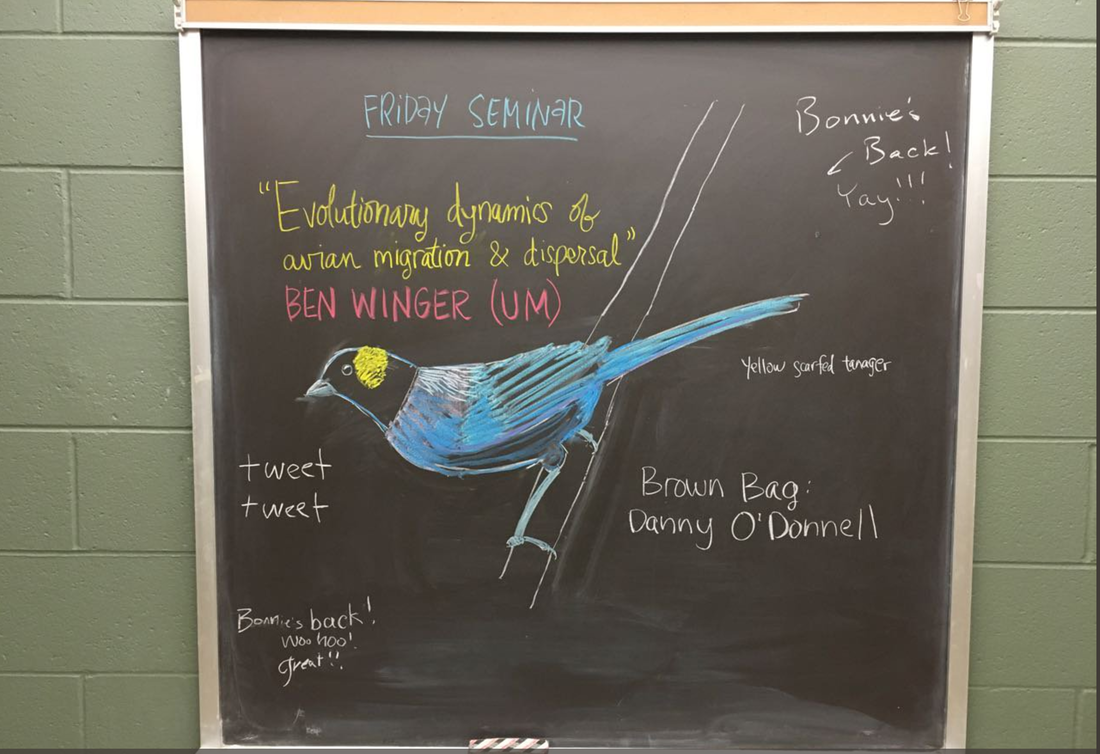