Our lab has diverse interests in avian evolution. A common theme is how life history influences evolutionary dynamics — including the process of speciation, the evolution of geographic range, and the adaptation of birds to global climate change. Our research is field-, lab- and specimen-based, both leveraging and contributing to the scientific capacity of museum research collections.
​
​Explore a few of our ongoing projects below:

Evolutionary dynamics of migration and dispersal

​This work is supported by the National Science Foundation.  Below is footage from one of our recent boreal field sites. Video © Brett Benz.

Magnetoreception and the evolution of migration

The biogeographical evolution of seasonal migration 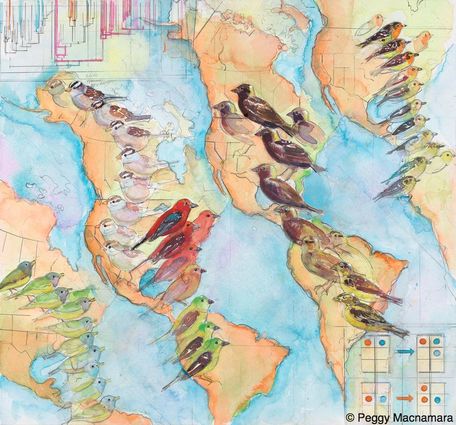 The seasonal migrations of birds and other animals have long captured human imagination, but our understanding of why species migrate to particular places remains poor. For example, many closely related species of songbirds breed alongside one another in the boreal forests of North America. Yet each fall these species migrate to distinct, often non-overlapping winter ranges — some species to the rainforest of the Amazon, others to Caribbean islands, others no further south than the southern United States — only to return each spring to the same patch of coniferous forest. Why do closely related species with overlapping ranges in one season have such different ranges in other seasons? And if an individual species can exist in such diverse habitats as spruce-fir forest and Amazonian jungle, why would its distribution be limited to only these disparate biomes? These idiosyncratic distributions challenge our understanding of the factors that limit species’ geographic ranges, and complicate our ability to predict how species will adapt to climate change and environmental degradation. We are using phylogenetic comparative methods combined with large scale distributional and ecological datasets to investigate the mystery of migratory bird distributions. 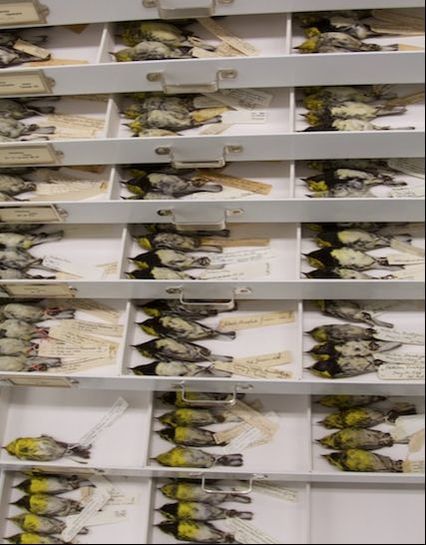 ​Through the dedicated work of museum curators, staff, volunteers and supporters, natural history collections harbor an unparalleled record of biodiversity during an era of rapid anthropogenically driven global warming and habitat degradation. We are leveraging museum collections of North American migratory birds collected over the course of the last century to understand rapid changes in avian morphology, ecology and population size and structure.

One current focus is on understanding patterns of rapid morphological evolution we observe in time series of specimens of Nearctic-Neotropical migratory birds that were salvaged from window collisions in Midwestern cities.  Our work in this system also focuses on understanding and mitigating the factors that lead to bird building collisions, especially artificial light at night. 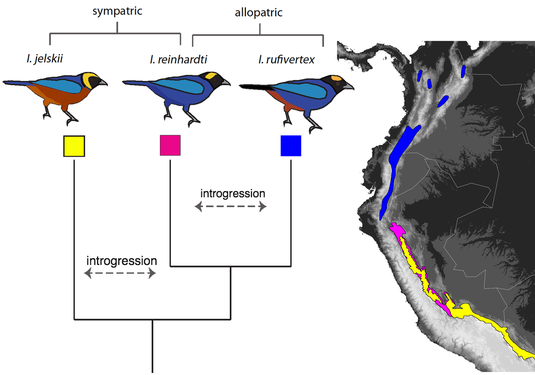 We are interested in furthering our understanding of the process of speciation. Birds of tropical montane regions will continue to serve as a model system for our research questions, which include: How much genomic and phenotypic divergence is required for sister species in secondary contact to coexist without exchanging genes? Conversely, how much gene flow between incipient species will prevent their phenotypic differentiation?  Is reinforcing selection against hybrids broadly important for the completion of avian speciation and achievement of secondary sympatry, or simply for the maintenance of hybrid zones? This research involves comparative genomics, fieldwork in the Andes and elsewhere in the tropics, and studies of museum specimens.
All images, unless otherwise indicated, © Benjamin M. Winger, All Rights Reserved